Art is math is art for Professor Coxeter

At 89, H.S.M. Coxeter is what he has been his whole professional life: a mathematician inordinately skilled at geometry -- a master geometer.

But Donald Coxeter (he uses a shortened form of his third name, MacDonald) is not done yet.

In a book-rich office, the frail-looking but erect master geometer talks excitedly about his latest project. He is about to publish a paper that proves Dutch graphic artist M.C. Escher got it mathematically perfect in one of his etchings. 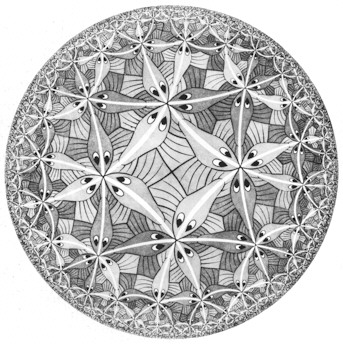 The work in question is Escher's Circle Limits III. It is an arabesque of intersecting arcs within a circle. For the past three months, Prof. Coxeter has been trying to find out how accurately Escher, who knew almost no mathematics, was able to repeat the same arc angles of intersection.

After half a page of trigonometric calculations, he determined that if Escher wanted to construct his painting from mathematical first principles, he would have used an arcane formula involving the cosine of an angle and the hyperbolic sine of a logarithmic function.

Mathematical dumkopf that he was, Escher did the entire drawing armed only with simple drawing instruments and his artist's eyes.

The result, Prof. Coxeter said with the awe dripping from every word, is astounding. "He got it absolutely right to the millimetre, absolutely to the millimetre. ... Unfortunately, he didn't live long enough to see my mathematical vindication," said the mathematician, who attributes his own long life to vegetarianism, a regular regime of exercise that sees him still do 50 push-ups a day, and the fact that "I am never bored." (Escher, born in 1898, died in 1972.)

It is also true that Prof. Coxeter, whose voice is still brushed with the sounds of his native England, encounters Escher on something akin to home turf: His colleagues describe Prof. Coxeter as a kind of artist of the mind.

"Modern science is often driven by fads and fashions, and mathematics is no exception," University of Alberta mathematician Robert Moody said in a letter supporting Prof. Coxeter's nomination for an honorary doctorate at York University. "Coxeter's style, I would say, is singularly unfashionable. He is guided, I think, almost completely by a profound sense of what is beautiful."

And like many artists, Prof. Coxeter revels in the ultimate impraticality of his life's work.

During the Second World War, he was asked by the United States to go to Washington and work on code-breaking. He accepted but then backed out for esthetic reasons.

"It didn't because it didn't really appeal to me; it was a different sort of mathematics," he said with the trace of a smile.

A psychologist might be tempted to relate Donald Coxeter's mathematical-artistic nature to the esthetic anxiety that attended his naming.

He was originally named MacDonald Scott Coxeter. But when a godparent contended that his father's name should be added, Harold was stuck on to the front. Then another relative noted that this turned him into H.M.S. Coxeter and made it sound as if he had been named after a steamship. So they put the S. before the M. and he became H.S.M. -- Harold Scott MacDonald.

Whatever the psychological effect of this early naming game, Prof. Coxeter was one of those prodigies who seem to tumble out of the womb number-crazed.

His mother noticed that when he was 2 or 3 he had become entranced with the columns of numbers printed on newspaper stock pages. This was soon replaced by an interest in cones and triangles and the symmetry of all geometric objects.

He thought at one point about becoming a composer, but when he was brought before two musicians to evaluate his talents, he was told to complete his education. That turned into a doctorate from the University of Cambridge and, from 1936, a scholarly life at the University of Toronto.

Some of Prof. Coxeter's most notable contributions have involved what are called polytopes. These are complicated objects of any number of dimensions that can't be constructed in the real world but can sometimes be drawn and always described mathematically. Escher often used polytope-like drawings to produce the sense of geometrical nausea that permeates his etchings. (Typical is his well-known Ascending and Descending, 1960, a perspective illusion of interlocking staircases.)

Prof. Coxeter's most easily identified contribution is something he describes as "the algebraic expression of how many images of an object may be seen in a kaleidoscope." So influential has his thinking been that these equations are now called "Coxeter groups."

But beyond that, his contribution has been to inspire people outside mathematics.

Escher met him at an international mathematics conference in 1954 and was soon asking for a simple explanation of how to construct a series of objects that grow smaller and smaller as they approach the periphery of a circle. Prof. Coxeter has had a book dedicated to him by architect Buckminister Fuller, another friend who translated the Toronto geometer's work into a more practical realm. He has also written the foreward to a book on geometry by Lewis Carroll (creator of Alice in Wonderland) and updated a version of a classic book on mathematical games, reflections and brain-twisters.

Given the otherworldly nature of his life's work, it is not surprising that there are stories of his somewhat impractical approach to the world.

In the age of the number cruncher, he doesn't use a calculator or a computer and writes all his papers in pencil so he can go back and correct them.

And when graduate student Asia Ivic Weiss, who now teaches at York University, told him that she would not be able to come to their regular weekly meetings because she was about to give birth, he gave her a 50-page preprint of a paper. "He said that it was something for me to look through if I had nothing else to do in the labour room," Prof. Ivic Weiss said.

Now, after 70 years of work, H.S.M. Coxeter sees himself most clearly as one of those fortunate people blessed with a vocation that also is their job.

"I am extremely fortunate for being paid for what I would have done anyway."

Stephen Strauss is the science reporter for The Globe and Mail, Canada's National Newspaper. This article is reprinted from the May 9, 1996 issue.